We Were Here will be available as an e-book soon on Kindle, Nook, Sony, iBookstore, Sony and others. . .

My story, “I Know You Are, What Am I?” is published online in the Spring 2013
issue of Roadside
Fiction. 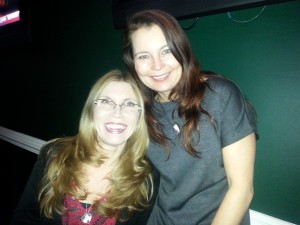 So yesterday I didn’t wake with a feeling that death was imminent, or that my life had passed me by. I didn’t feel any older than I did the day before, or even the year before (Okay my hair has thinned a tad, and there are a few more brown spots on my hands, and the wrinkle beside my mouth has deepened).  But I had a wonderful breakfast made by the man I love, my husband of nearly 25 years. I ran  3 1/2 miles on a beautiful trail through the woods on Kent Island. And then Don took me out to dinner where my friend for life and her husband surprised me by joining us, and showering me with gifts and tickets to a Styx concert in June. Tracy and I have been friends since we were three, when her mom plopped her down in my kiddy pool, and we’ve been together in that whirlpool of life ever since. We are blood sisters, laughing together until we cried at times, and holding each other up when the tears were real.  I am blessed with so many good friends and a wonderful family. And it is this realization at fifty that resonates with me so clearly. It’s not about the accomplishments or the creations, it’s about the strength of our personal relationships that really matters. In a world that seems increasingly alienating, where people are more comfortable hiding behind a screen, texting instead of picking up a phone to hear that special voice, I am reminded over and over again that true friendship  is a remarkable gift. 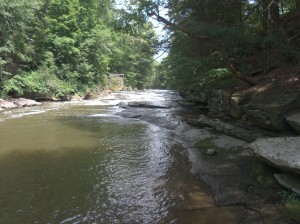 Watch the moss-coated stones–they can be slippery. The water seeps into the cracks as it makes its way down into the creek–the waterfalls flowing, cascading white, like sheets being shook over the natural stairs. Everything is made by nature here–weathered by time–and, yet, so much stays the same: the spot where you can dive off the boulder and not break your neck; the large branch that leans precariously over the water, yet to break; the winding steep path down the woods (the roots of the trees like reptilian feet) that leads you to this peaceful place; the blue heron that sits upstream on the falls, staring at you, annoyed by your presence.  “Why are you here?” he seems to ask.  The question I’ve been asking myself for so long–with only the response, “Who knows?”  But, here, in my favorite place, it all flows clear like the pristine water from the mountain snows:  I am here to listen, to learn–to understand that I’m a mere ripple in the eternal flow.

Last week I had the slightest taste of what Boston went through on Friday. A cop came to my house in my one-horse town of Galena, MD and asked me if I’d seen a guy in shorts and a tee-shirt running around my flower farm.  I said no, why? And he said a guy jumped out of a truck on a routine traffic stop and ran off into the woods. He said they had a police helicopter out looking for him, and soon I heard the whir of the engine overhead. I kept imagining the guy in the woods ducking behind trees, hiding behind boulders.  The cop asked me to open my  garage door to see if the guy was hiding in there, and then he went on his way. I locked all my doors and windows (though it was a sunny day, in the seventies). And then I had to leave to go to work. Later, I found out that the guy was harmless enough, running from a ticket for dumping oil illegally. He was now holed up in a friend’s house.

So when all of Boston had to be on lock-down, in this miniscule way, I could relate. I understood what it was like to have this unknown threat outside, not knowing what he was capable of. . . No one knows the extent of evil–if that is what that 19-year-old Boston Marathon bomber embodies. When they found the kid in the boat, it struck me that they waited until dark to flush him out. They waited until they could shine the light on him, goodness bearing down on darkness, evil. It made for excellent TV. But this isn’t TV. And we’ve long since moved beyond black and white. The world is increasingly dangerous, complex and grey. That 19-year-old’s (and 26 year old’s) parents are in shock–still in a state of denial. No way could their two boys have done something as heinous as this.  But they were their boys. Their babies. And they saw the light in them.