My story “Church of Redeeming Love” is published in www.brightflash1000.com

My story “I Know You Are, What Am I?” is published online in the Spring 2013 issue of Roadside Fiction and also in the anthology Taboos & Transgressions: Stories of Wrongdoings published by Madville Publishing in 2021.

My story “Side Road” is now published on TrouvailleReview.org

Last week I attended The Gathering literary conference in La Plume, PA. It was an amazing four days of lectures, workshops, wine receptions and delicous food. I met wonderful people and was inspired, humbled and awed by the talks of Greg Maguire (author of Wicked); poet Nancy Willard; Loung Ung, who wrote the memoir First They Killed My Father, from a chilling five-year-old perspective of her early life in Cambodia; and the great Sir Salman Rushdie, who has received almost every major literary award as a writer, and who had to live in hiding for ten years during which there was a death sentence placed on him by the Ayatolah Khomeini. It has been almost eleven years since the lifting of the fatwa, and he would rather put that period of his life behind him, but people still question him about that time, and his book, The Satanic Verses, that created much ado about, really, nothing (the passage that caused the uproar was merely a dream sequence meant, Rushdie said, more for humor. It suggested the prophet Mohammed once prayed to a mystical bird goddess), and his publishers would love for him to write a memoir. But as he said, he didn’t become a writer to write about himself. For him, writing is as much about social change as it is invention. He believes it is more important than ever to write books that reveal what our governments try to hide from us, quoting Abraham Lincoln’s remark to Harriet Beecher Stowe : “So you’re the little lady that started this big war. ” Citing the scene in Saul Bellow’s, The Dean’s December, in which an incessantly barking dog demands, “For God’s sake, open the Universe a little more!” Sir Rushdie asserts that it is the artist’s weighty task to be the expander of the Universe. Amen. 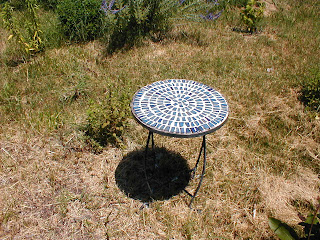 I am dedicating part of this summer to finding treasures to add to my flower garden. Last Wednesday I went to the auction in Crumpton Md and found this lovely brass table topped with shards of blue glass. When the sun shines it sparkles like bits of saphire–and only for ten bucks. It truly is the little things in life that make it all worth it. Lunch with an old friend. A kayak down a still creek bordered by trumpet vine. The cry of a lone blue heron. 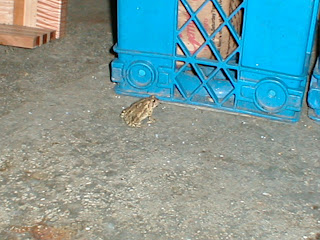 Look closely and you’ll see the little frog that has taken up residency in our garage for the summer. He has become the favorite play-toy for our four cats (they are ever so gentle), and he is a wonderful late night companion when I am shuttling flowers back and forth from our kitchen to the flower shed outside. At each passage, he hops along beside me, boldy staring up at me with those big, dark, pop-eyes. He has it made with the cats’ water bowl for his swims, and as we leave the light on in the garage, bugs get fried then fall to the garage floor nicely grilled for him. For a bed, he sleeps inside Don’s work boots. Good digs.